Glass materials used for optical systems are divided into three major types.
Optical glass that transmits light such as prisms and half mirrors, substrate glass used for mirrors, and glass for a lens that is subdivided by refractive index and wavelength dispersion.

Optical glass material that is collectively called BK7, and has been used for lenses and prisms through the ages. The model number differs among manufacturers such as BSC7 or BSL7, but since the composition ratio, optical property, physical property and chemical property are almost the same, “BK7” is used as a generic name.
This material has high permeability in the visible range and very low amounts of bubbles and inclusions, and striate and uneven refractive index that are problems in optical systems are reduced to the level where they practically do not have any influence.
In addition to the use in lenses and prisms, it is used in most optics such as substrates of mirrors and beamsplitters or substrates of various deposited filters.

When you irradiate glass with ultraviolet light, the glass sometimes fluoresces.
Also, prolonged exposure to ultraviolet light causes a phenomenon called solarization, in which coloration to reddish brown occurs inside the glass. Synthetic fused silica is glass resistant to fluorescence and solarization, but these phenomena sometimes occur when the wavelength of ultraviolet light is short. The causes are impurities inside the glass or molecular level flaws, and these causes can be reduced by improving purity of materials or devising a manufacturing method. Synthetic fused silica manufactured in such a special manufacturing method is used for excimer lasers Ar*F (193nm) and Kr*F (248nm).
(Contact our International Sales Division when using with an Ar*F excimer laser.)

Optical glass made of pure SiO2 without inclusion of any other components.
The properties of this material include higher transmittance in the ultraviolet region and infrared region than BK7, and low thermal expansion.
Its refractive index is slightly smaller than BK7, but it provides internal quality equivalent to BK7, and is used in various optics as in the case of BK7. Especially, this is oftenthe material of choice for use with wavelengths other than the visible range. Its low thermal expansion also makes it useful for substrates of highprecision mirrors or plane standards.

Synthetic fused silica exhibits characteristic absorption at the infrared wavelengths of 1.38µm, 2.22µm and 2.7µm. This absorption is due to water (OH radical) attached to SiO2 molecules.
Water free synthetic fused silica is manufactured in a special environment to prevent water from bonding with SiO2, thus it can provide high transmittance up to 3.0µm infrared.
On the other hand, its transmittance in the ultraviolet region is not veryhigh because impurities are added to dewater it forcibly. 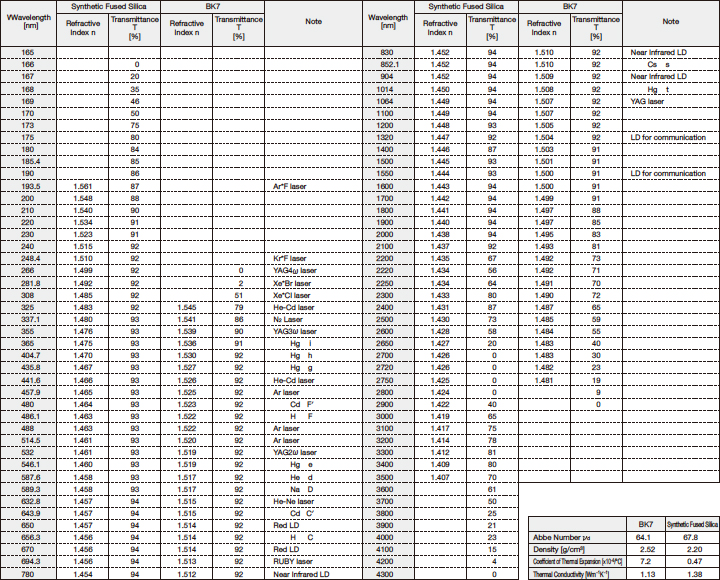 * Transmittance includes loss of the light volume by reflection on the front and back surfaces.
Comparison Chart of Refractive Index and Transmittance between Synthetic Fused Silica and BK7 (Reference Data)&nbsp

Usually a mirror uses a substrate made of BK7 or synthetic fused silica glass, polished to high precision.
In cases where high surface flatness is not required or a thin substrate is used, however, a mirror is fabricated from glass called Pyrex®, which is used as a material of sheet glass, white glass or blue glass.
Some sheet glass achieves high flatness without polishing, and sometimes mirrors are fabricated by depositing coatings directly on this type of sheet glass.

The generic name of glass used for dishes or heat-resistant containers, and Pyrex® is a typical product.
This material is resistant to scratches because it is chemically very stable, which makes it useful as glass substrates of mirrors.
Pyrex® is a registered trademark of Corning Incorporated.

This material is sheet glass generally called white sheet glass.
Since its optical properties are similar to BK7, it is sometimes used as an alternative to a BK7 glass substrate. However, the usage is limited because its internal quality is not guaranteed.
B270® is a registered trademark of SCHOTT AG.

This material is called soda-lime glass or blue sheet glass, relatively inexpensive and used for windowpanes.
Alkali components added for melting it at low temperature cause a slightly greenish color. This material is rarely used for optics unless for special cases.

Different glasses that vary in refractive index and wavelength dispersion (the Abbe number) are used for camera lenses and lenses for various lens devices.
A lens system created with only one type of glass will have greater chromatic aberration, and cannot provide high-performance properties.
When different glass is used for each lens, however, it is possible to create a functional and high-performance lens system. This catalog lists only some of the glass for lenses because one type of glass is sufficient to achieve a purpose in case of a simple lens system for experiments such as for focusing or collimating laser light.
This catalog uses general names of glass materials, but eco materials that do not contain lead or hazardous substances are used for products to which RoHS applies.

An achromatic lens reduces chromatic aberration by combining glass that has low wavelength dispersion of refractive index with glass that has high wavelength dispersion. Glasses that have low wavelength dispersion (an Abbe number of 55 or over) are called crown glasses, and glasses that have high wavelength dispersion (an Abbe number of 50 or more) are called flint glasses.
The glasses for lens are mainly divided into these two categories.
Both crown glasses and flint glasses are subdivided by the properties of refractive index and wavelength dispersion, and named in a way using XX crown or XX flint such as crown glass K, borosilicate crown glass BK, flint glass F or dense flint glass SF. BK7 seems to be so named because it was developed as the 7th borosilicate crown glass.
Nowadays, these glasses are
usually called by the abbreviated former model numbers used by SCHOTT, and complicated glass names are rarely used. Incidentally, the glass was named crown because its viscosity is so high that when it is melted and a glass drop falls onto the liquid surface, the surface spreads in a crown shape. It was originally a jargon of glassworks artisans. Regarding flint, it came from flint used as a raw material.

Glass fabricated by adding absorbing substances such as metal ions to glass so that it will absorb a certain wavelength range.
Due to the fact that different glass materials are used for different transmission wavelengths, the optical, chemical and mechanical properties sometimes significantly differ. It is dangerous to consider that glasses with similar transmission wavelength characteristics have similar properties such as refractive index. Consult our International Sales Division for properties of glass filters.

If a mirror with high surface accuracy is used in an environment subjected to drastic temperature fluctuation, the surface flatness of the mirror sometimes gets distorted.
The cause is the temperature distribution in the glass substrate of the mirror, because expansion varies among high temperature parts and low temperature parts. For this reason, substrates used for mirrors that require high precision are made of low expansion materials.
In general, silica glass is often used (coefficient of thermal expansion 5.5×10－7/℃), but if higher precision is required, materials called low expansion glass or zero expansion glass are used.

This material is a glass ceramic containing a crystalline component that has a negative coefficient of expansion mixed in a low expansion vitreous component, and its coefficient of expansion is minimized to ±1×10－7/°C in the temperature range between 0°C and 50°C.
Scattering by the crystals clouds the inside of the glass, and attenuation of light occurs inside the glass.
Since this material is relatively easy to process and polish, it is often used for large mirrors.
Zerodur® is a registered trademark of SCHOTT AG.

This material is a zero-expansion glass ceramic fabricated by crystallizing crystal grains that have a negative coefficient of expansion inside glass.
Its coefficient of expansion is minimized to ±1×10－7/°C in the temperature range between 0°C and 50°C.
The inside of the glass is transparent and transmits light. Its superior thermal, mechanical and chemical properties make it useful for laser mirrors or standard block gauges.
CLEARCERAM® is a registered trademark of OHARA INC. 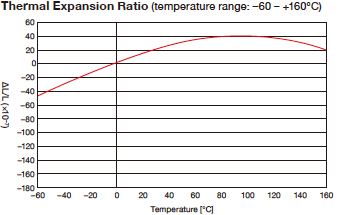