There are many parameters that must be taken into account when choosing optics holders.
The optics holders need the correct dimensions and have the required adjustments for the optical system.
Below are some examples of optical systems to give an idea of OptoSigma's selection. 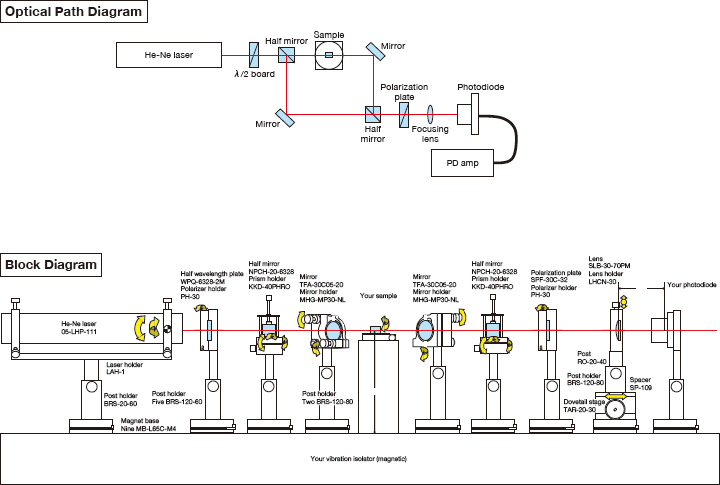 Mounted optics must be placed in relation to the laser beam source to set up the optical system.
Note the adjustment axes of the mounts on your block diagram according to each element's application.
During final review of the optical system, ensure that the holders do not physically interfere with each other. Also, make sure each element has the correct adjustments along the correct axes.

Generally, optical systems are set up on a horizontal plane and secured to a baseplate as most laser sources emit beams horizontally. OptoSigma has a wide variety of post holders, and spacers to align optic heights with laser heights.
If there is a fixed optical axis height in the system, use the fixed height as the standard height for all other components. When there are no fixed optical axis heights, set the optical height no lower than the lowest optical height of the holders .

Typically, the path that light takes through an optical system cannot be seen directly
The process of directing the light along the desired path using the optical elements is referred to as optical alignment.
Here, we present a few alignment techniques that may be useful.

Mark the intended beam path on the top of the base plate.
Having the path go through the centers of the tapped holes in the base plate makes aligning the holders easier in most cases.
Position the laser and turn on the beam. Place a ruler onto the breadboard as shown below. Adjust the beam to the desired z-height and x-y location. Move the ruler along the beam path to the edge of the breadboard.Adjust the laser source so that the height and location are the same as the first measurement. To get a nice parallel beam, perform the same measurement at intermediate locations between first measurement and the edge of the breadboard. After beam adjustment, the laser source can be secured.

Passing light through the center of the optic

Placing optics perpendicular to the beam

On the baseplate, mark locations of the beam source, mirror, and the angle where the beam will be reflected as shown in the following figure.
Set up a holder with mirror at 45 degrees so that the center of the reflected surface can form a right angle beam when a laser is incident.
Rotate and tilt the mirror so that the laser beam reflected beam is parallel to the breadboard.

If the irradiation point of the laser beam is not along the center of the lens, the transmitted beam will deviate away from the optical axis. A YZ lens adjustment needs to be used to center the lens properly with the laser.
Also, some lenses require an X-axis adjustment mechanism to set the point where the laser beam focuses. Adjustment mechanisms such as dovetail stages that allow large and quick travel are suitable for this.
([Attention] Lenses with short focal length such as objective lens require a precise fine-tuning mechanism for the X-axis.)

In a general optical system, lens tilt adjustment is not required.
The direction of beam that passes the optical axis does not change even when a lens is tilted. However, aberration caused by lens tilt can be problem in a precise optical system such as interferometers or laser processing. In these cases, the lens tilt needs to be adjusted while observing the intensity distribution of wavefront and focus spot to optimize the optical system.

When an incident laser beam is perpendicular so the surface of a plane parallel optic, the transmitted light does not deviate. If the plane parallel optic is tilted, the output path is shifted parallel to the incident light path. The shift distance depends on the refractive index, angle of incidence, and the thickness of the optic.
A tilted beam splitter can alter beam paths significantly. When designing optical systems with beam splitters ,use a baseplate on a breadboard that has multiple mounting hole patterns which will allow for less constraints in the system.

Most holders in the catalog are mounted with a M6 male thread post.
To call out a different male thread post, the female internal thread must be changed according to the post type.
Specifying an option code to the suffix of the part number allows to change the female thread for post mounting to 8-32UNC female or M4 female. The following charts show the different suffixes.

◎ Specify the necessary female thread by adding the option code as the suffix of the catalog part number.

A holder part number with an option code does not come with a post.
To use the holder or post with an inch-based baseplate select the UU specification for 8-32UNC. For metric M4 thread post or baseplate, please select EE as the specification. 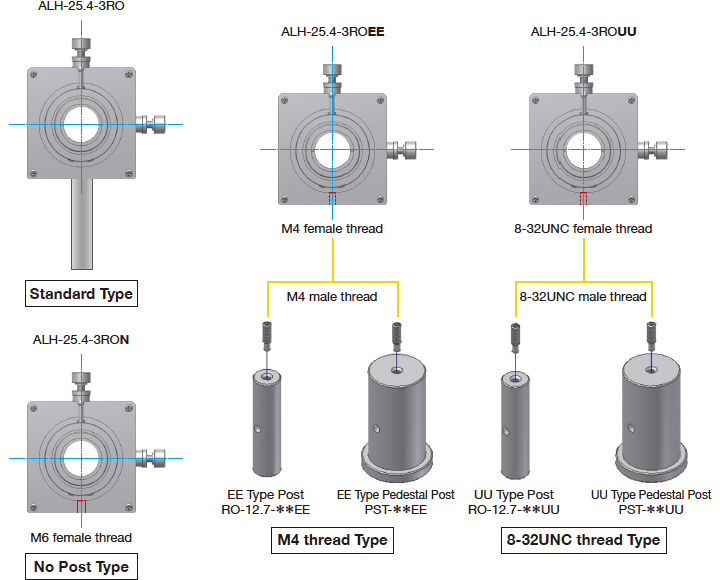