Cells and biomolecules can be freely handled with an optical hand.

Granule in a living cell is optically trapped. 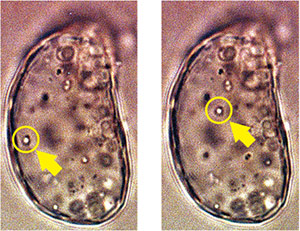 Altering orientation of a cell with 2 beams

Refraction of light can explain the theory of Laser trapping. Picture on the right shows laser beam shaped by an objective lens trapping a globular particle that has different index of refraction from a medium.
A photon which passes through an optical path A shifts its progressing direction due to two refractions in incidence toward and from a particle. Momentum of a photon alters before and after passing through a particle, thus a particle receives impetus of counterturn from its shift. This force is indicated Fa in the figure. When this force is integrated with full laser beam, a particle gets trapped in equilibrium point as a vector of integratedforce always heads toward the optical focal point.

An example of optical system

Micro Manipulation System consists of light-source part deriving from a laser head and beam collimator, and optical system to operate laser beam within microscopic view by leading it into microscope, both of which are held in main body. The beam from a laser head is adjusted to the objective lens in use, then, splitted into two. Each beam traps particles by condensing through an objective lens after being lead to a microscope with the identical optical path after reflecting through movable mirrors so that they can be freely moved within microscopic view.

It is a means of wrapping cells or particles or etc., using radiation pressure of light occurred in laser irradiation to an object, like seizing an object with a pair of tweezers, which was first thought up by Arthur Ashkin in 1970s. Recent applications of its feature, the feasibility in trapping particles of μm order, to engineering science, medical science, biology, etc., have been reported and it made the development of this device be watched with keen interest.
Sigma Koki’s Micro Manipulation System has realized introduction of laser in optical unit by application of Opticsand Opto-mechanics produced by SIGMA KOKI which enabled space-saving and high efficiency.