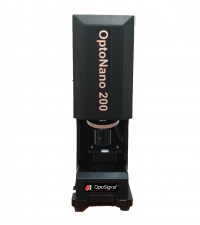 In stock
SKU
PT-ONANO
Microscope technology has advanced from conventional optical solutions into sophisticated super-resolution microscopes. An ordinary optical microscope’s capability to observe sub-wavelength structures is limited by Abbe’s Equation that Ernst Abbe found in 1873, also called Abbe’s diffraction limit. Microscopic spatial resolution is limited by optical diffraction, which is about half of a light wavelength. In the visible light spectrum, it’s approximately 200nm. Super-resolution optical imaging can now be found in many research lab settings. However, transcending the ~200nm barrier to optical imaging in natural ambient air has always been the limitation. In the early 2000’s a group of researchers began to develop a technology called Optical Microsphere Nanoscopy (OMN). OMN was incorporated into a revolutionary instrument named the OptoNano, the world’s first nano-scale imaging tool in ambient air with a controllable working distance, providing resolution down to 137nm with no sample preparation required. OptoNano microscopes have not only broken the optical limit but also the barriers of high cost and high complexity of operations to super-resolution microscopy. This has opened a new paradigm to enable adoption of this unique super-resolution microscopy technology by users from research labs to bio-chemical scientists to industrial production floor applications.

Related Products
Check items to add to the cart or

We detect that you are accessing the website from a different region. You will be redirected to a local version of OptoSigma.

Shall we send you a message when we have discounts available?

Thank you! Please check your email inbox to confirm.